Home › Blog › Guest Post: eLearning…It’s Bigger On The Inside – by Mark Sheppard

Guest Post: eLearning…It’s Bigger On The Inside – by Mark Sheppard I’ve known Mark Sheppard for a while via the magic of the internet. I’m honored to call him a colleague and enjoy our conversations immensely. I appreciate his perspective on eLearning and glad he agreed to share some recent thoughts with the Litmos community on our blog. If you do not know Mark, then you should follow him on twitter @marklearns and get to know him better. You’ll be glad you did.

“When not trying to manage his Twitter feed and ever-growing list of readings, he works for a neat little learning services & innovation firm in the Greater Toronto Area. He also teaches advanced Instructional Design and Adult Learning at the under-grad and graduate levels.”

You can find out more about Mark on his About.me page.

eLearning: It’s Bigger on the Inside by Mark Sheppard

A couple of unexpected finds in my travels along with a recent exchange on Twitter both got me thinking about the current state of what we colloquially call “e-Learning”. Fans of the BBC cultural icon known as ‘Doctor Who’ will appreciate the title above, but for those who are not as familiar, the eponymous Doctor (a humanoid alien) travels Time and Space in a spacecraft that looks suspiciously like a 1950’s vintage British Police Call Box from the outside, but is considerably larger when one steps through the doors and takes a good look around.
The Doctor also has the ability to regenerate himself when seriously injured, taking on a new humanoid form, yet retaining all or most of his memories in spite of a new look and new personality.
While there were other parts to the exchange, the major assertion I saw on Twitter was that elearning is “dead” and that we must look to new things.
I’m afraid that I must disagree and I believe that elearning has indeed been regenerated and already offers many new things.

My colleague was right in one sense when he indicated that we need to embrace users beyond the laptop or desktop screens. We know that learners (any learner) are increasingly mobile, drawing lessons from sources like YouTube, Vimeo, Vine, Instagram, Periscope, etc. In workplace learning, or even higher ed, we know that the developmental solutions struggle to keep pace in an increasingly connected society.  We tend to be less flexible when it comes to new tools, and in some ways I see why. After all, we make serious investments in learning technologies and we also have to think about lifecycle and updating and long-term management.
Think back to some of the early commercial “CBT” CD-ROMs hit the workplace (remember those?) We were living in a world where Netscape was fighting Internet Explorer for dominance, and nobody was quite sure what the Web would mean for everyone. Linear “next ware” caught people’s attention because it was shiny, clicky bling-bling, and it didn’t need instructors.
Or so they thought.
Fast-forward 15 years or so and in spite of all the new and exciting things that the Web has become, we still find ourselves dealing with platform wars, competing standards, and more and more players in a crowded market. Instructors are still around, and so is technology-based learning.

Having worked for a vendor training partner in those early days of CD-based training offerings, I’ve seen a lot of things happening, and in a lot of ways, elearning is regenerating itself. We see familiar features and functions (not all of them good) but we see glimpses of new thinking. People, users, learners, whatever we want to call them, are living in the Cloud. We also see more vendors looking to the Cloud as their base of operations, opening up a lot of possibilities for collaboration and sharing. There’s such a potential for richness and depth that is almost unparalleled, so the solutions we build can truly become “bigger on the inside” and a heck of a lot less than what it appears at first glance.
On the flip side, we see some established vendors making little more than incremental improvements to their legacy desktop products, many of which don’t take this ‘brave new world’ into account.  In that respect, another assertion made by one of my colleagues in that Twitter exchange is absolutely spot-on: our solutions need to take into account more than just “sit at a desk”, “use a keyboard and mouse” solutions. We must be thinking about solutions that address the “consumer end” of the learning equation just as much as we need to be thinking about the learners themselves.
In short, not enough vendors are playing in this “responsive design” space for it to gain momentum.  The platforms I have explored are quite promising, but for the moment, the legacy offerings still have a lot of traction.

The unexpected find was something I think vendors and practitioners alike should pay close attention to; I really think it’s a sleeper solution with serious disruptive potential; It’s Apple’s iTunesU system.
Unlike a few of Apple’s goodies, this one is available for Windows PC, Mac, and, of course, iOS. At first, it was little more than a collection of publicly available readings, videos, and other resources from Universities and other institutions around the world.  For self-confessed learning junkies like me, it was a real treasure trove. Unfortunately, some institutions took iTunes U more seriously than others, and there were lots of “course outlines” kicking around with little-to-no-content behind them.
Now, we see a very different iTunes U: It’s functioning like a Virtual Learning Environment, where there are assignment submissions, grading, and discussions. In short, lots of the things that we expect from really high-end platforms. It allows institutions to blur the lines between their enrolled students and others from the outside who may want to partake of the learning for its own sake. Again, institutional choices will determine what is available, but the potential is absolutely massive. I think this is a genuine game-changer for institutions. Yes, dealing with the mighty Apple may seem like the relationship Microsoft has/had with its office software and operating systems, but you have to give them credit for quietly pushing this out and making it available. Regardless of platform, something as simple as an iTunes account could open an entirely new world of learning for those with the right hunger.
The downside? It’s limited to Educational/Cultural Institution Use at the moment. I am genuinely hoping that restriction comes off, because I could see a real place for this platform, particularly in the maker/user-created-content communities. Because it’s not as platform-limited as it could be, the reach is considerable and may well put some of the proprietary MOOC platforms on the ropes.
So, there you have it. One good example of a platform that will respond to the needs at the user end, and all without a lot of customization. Seems like a pretty positive regeneration of what we often call “e-learning”.
There’s lots of room inside. Come on in.
Tweet Share Share Send 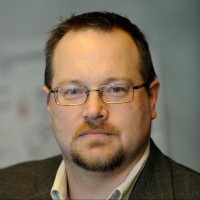 Mark is a veteran L&D practitioner, leader, blogger, and speaker, focused on disruptively innovative solutions to workplace learning. His work has been recognized with awards at DevLean (2009) and from the Royal Canadian Air Force (2012, 2014). Mark is an active member of the Armed Forces Chapter of ISPI and is a founding member of Workplace Insiders, an international alliance of workplace learning practitioners. He holds a Diploma in Graphic Communications from Canadore College, a Certificate in Adult Training and Development from the Ontario Institute for Studies in Education at the University of Toronto, and a Masters Degree in Learning & Technology from Royal Roads University.