Technology Shifts Shine a Light on the Future of Learning 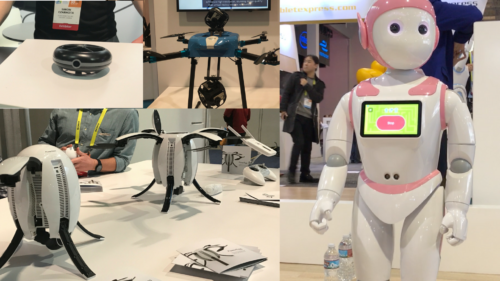 Every month I contribute a short video segment as the US correspondent for LearningNow.TV. For January, I compiled a brief recap of my experience at CES2017. I did not focus too much on the training/learning potential of these gadgets in my report. However, I think it’s important to note that I did not capture these moments just because they looked interesting. I share CES with you because it’s a glimpse into the future. And it’s a not too distant future. Many of the booths have products best described as the birthing of an idea looking for funding. Most will never be seen again. But some will become a part of the technology ecosystem we all enjoy.

CES2017 was different and yet the same as last year. 2016, like previous years, CES continued to have a major focus on TV technology both in size and quality. This year had far fewer TVs than I expected. They are certainly getting thinner…much thinner… and the quality is getting better. But the manufacturers in the expo simply didn’t showcase them on the massive scale that I remember last year.

What part of the story does that tell? TVs/monitors/screens are a commodity. There just isn’t anything else you can do to make them any better. The only thing I can think of is to make them cheaper. They are as thin as you need them. Any thinner and they disappear. But maybe that’s the point. They are as big as they need to be and they can even be curved. The image quality is beyond great as well. How often do you use your massive 60inch, or bigger, screen to view content? I’ll bet not as often as you used too. The tablet. The smartphone. These smaller screens rule the day for the average, actively mobile, media consumer. And that’s something L&D professionals should think more about.

The drone section was huge. Drones are a big deal. But what do they have to do with training? Like all training solutions the answer is the same: It depends. I wrote about drones in a recent post titled How Can Drones Contribute to Corporate Training Solutions? The reality for training professionals is that drones can produce learning content quickly and easily in places and from angles previously not possible. Drones can also now give us 360 degree video as well. And that’s a game-changer.

We are all just barely getting used to taking pictures and recording video with our smartphones. Imagine how clumsy that will seem when you can simply toss a drone into the air and have it take pictures, and stream video, while it follows you around. Instructors can teach field workers from the comfort of an office while viewing a live video stream of a worker practicing his/her craft. The drone simply becomes another set of hands “holding” the camera.

There were so many cool things at CES, I did not have enough time to talk about robots in my video. But the presence of robots in all shapes and sizes rivaled the presence of drones. Robots are very cool. But I think they have a long way to go.  At best they are currently fun toys: Differently shaped computers.

But what story does this major robot presence at CES tell? It’s chapter 2 or maybe 3 of a very long book. There are basically 2 categories of robots. There are the industrial robots that perform specific tasks. They can best be described as mechanical arms that grip, and move objects. One fun example was a robot arm that grabbed a long paper cone-shaped stick and whirled it around in a tub of pink fluffy sugar. Yes, I experienced the cotton candy robot.

The other category of robots is the humanistic robot. They come in all shapes and sizes. Some talk to you and allow you to talk back. To me, they all feel like the early versions of R2D2 and C3PO.  The near future will put Alexa into a humanistic robot. I don’t think Alexa will be just a cylinder sitting on your countertop for much longer.

Telepresence robots are already being used in teaching. They currently come as iPads on a rolling stick. But that will soon change. It’s not that far off before your presence in another location can be represented by a robot with more advanced capabilities.

Performance Support for All Activities

Writing about male fertility testing seems very random in this context. And referring to it as “performance support” seems to get a chuckle out of most people. But in this case the learning value comes in the form of data allowing you to make informed decisions about your activities or performance. As Tim Ferriss would say, “optimal performance”. When you have the right data, it’s easier to optimize your performance by making the right decisions. This applies to making babies, just as much as it does to building muscle or losing weight.

One of the last products in my video above is of the female swim suit (formerly known as the bikini) that let’s you know when you’ve exceeded your levels of healthy sun exposure. Can we make a connection to training/learning in this case? Sure we can. Again, it’s the data that matters. A woman, wearing the suit can accurately predict how long until her skin begins to burn because it’s the right data, at the right time, in the right format. We no long need to guess how safe we may or may not be on the beach.

In business, think of the sun data as a business metric. Think of all the metrics that could help you perform better by making better decisions. The same sensors and technologies used in these gimmicky products can be used for real business needs. The lumo lift is a small sensor that will vibrate when you slouch in your chair. That simple cue reminds you to correct your posture which in turn improves your performance.

As an industry, as we shift our focus more towards performance improvement and behavior change, it’s the combination of hardware, data, and software that will drive future solutions. Courses will educate and inform us about WHY the tech works and how best to respond to the cues. But it’s the sensory cues and spaced repetition of those cues that will drive the most impactful changes. It’s connecting all of the aspects of learning, behavior change, and performance that will be a part of our industry moving into the 21st century.

CES2017: How Can Drones Contribute to Corporate Training Solutions?

The Consumer Electronics Show is held in Las Vegas the first week of every year. It’s over 150,000 people flooding...

This year’s CES2016 is a glimpse into the near future of tech, but a further future for eLearning. It’s easy...