Hunger to Learn: An Inspiring Story 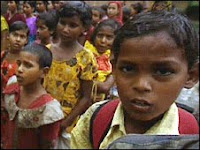 I read something that has had a real impact on me and is definitely worth sharing, especially because it’s centered around education and learning. The BBC are running a series called ‘Hunger to Learn’ that focuses on education in poor countries and consequently, some amazing initiatives that are being driven out of necessity by unlikely people worldwide.

Yesterday I was checking out Jane Hart’s Delicious bookmark list and found a link to a BBC story about a 16 year old boy in a small West Bengal village, who has set up and become the headmaster of, a backyard ‘school’ of  800 poor but extremely eager-to-learn children. Without his help, these children – who cannot afford to even attend the free schools because they need to work the days to support their family – would  be illiterate.

Babar Ali is that 16 year old and although he may sound young, he actually started this project 7 years ago! He’s one of the lucky ones who can travel the 10km to school every day to sit in a classroom learning the things that will help him to get a better job and more opportunities in life. After seeing how eager the other kids in his village were to learn the things he was learning at school, he began teaching a small group of children what he’d learned, when he came home from school each day. This was the beginning of an education revolution for his village, and the beginning of hope amongst a community that before now couldn’t see a way to improve the quality of life for their off-spring. Now this village has children who dream of becoming doctors and nurses, and all sorts of other jobs, just because they’ve been given the opportunity to learn.

It’s an awesome story, but it really brings home the fact that education is still for the privileged. I always find it amazing how school children in the poorest countries you visit, are always dressed in crisp white starched shirts and take so much pride in their appearance. In comparison to first world countries where many students ‘customize’ (read: destroy) their uniforms as an act of rebellion. I really hope in the coming years that online learning can play a big part in making education more widely accessible to communities like this one.

In saying all this we’ve decided it’s definitely time for Litmos to get behind a Kiva loan – check out their site if you’re not familiar with this very cool organization. I’ll post some information on that once it’s up and running so we can follow where the money goes and the kind of initiatives that are being supported.

Read the full BBC story & watch a short video about Babar Ali and his school here: The Youngest Headmaster in the World

Who’s on the L&D Naughty List this Holiday Season?

We’re making a list. We’re checking it twice. We’re going to find out who’s naughty or nice — and who...

L&D Is in the Spotlight, but that Comes with Some Heat

The old lament was that Learning & Development (L&D) didn’t get enough respect from leadership. There was never enough support...