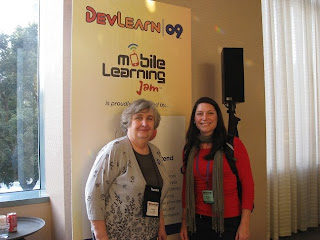 I just sat in on Judy Brown’s first session on mobile learning in the Mobile Learning Jam area. This session was an overview on what defines mobile learning, current uses and the future adoption of this technology.

One thing Mobile learning is not: “It is not about shrinking a course down to a little screen”. In Brown’s definition it is learning done on a device which fulfils these criteria:

There was some question as to whether a laptop is classfied as a mobile device, but Brown believes this not to be the case as the interactions with it are no different to those with your PC.

All mobile results so far (there were examples of a Merrill Lynch study – more on this below – and a Morgan Stanley Oct 20 presentation) point towards the future of mobile learning being bigger than we expect. Everything from mobile ESL classes which as you can imagine are very accessible for a taxi driver with spare time during the day, classes on culture shock developed by a newcomer to the UK shocked by cultural differences (port.c-shock.com), and augmented reality role play environments for work experience.

The Merrill Lynch study mentioned has been an eye-opener. They deployed three pilot compliance courses and the results showed:

Finally, to round off Brown mentioned a pretty startling figure which came out of the above-mentioned Morgan Stanley presentation – an AT&T study shows that there has been a 4932% increase in mobile data traffic in the past 3 years (!), and the download of eBooks has now surpassed that of games. If this isn’t an indication of where it’s all heading, I don’t know what is.

DevLearn Mobile Jam- log on to mlj.mlearning.com and download the app to stay tuned to mobile learning info at DevLearn

There have a been a lot of great reviews, summaries and reflections on the DevLearn09 conference that took place in...

Congratulations to The eLearning Guild for 10 years of DevLearn! DevLearn has been the most influential event in the eLearning...