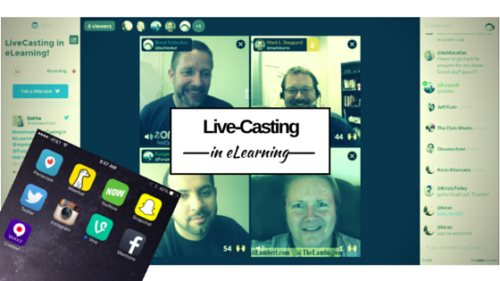 Technology is shifting again. It all started with a live-casting app called Meerkat at this year’s SXSW event.

It was quickly followed by Twitter’s entry called Periscope.

Google couldn’t be left out so they launched YouNOW.

And most recently Facebook entered the race with Mention. Unfortunately, Facebook made their early launch only available to celebrities. So, I won’t…mention…Facebook’s app much. HA!

Yahoo is also getting in on the live-casting action with LiveText. It’s a strange app because there is no audio. It’s only texting with a live video stream. Hhhmmm… Not sure I get it.

This trend is moving fast. I just recently blogged about the nationwide live-cast of the Applebees marketing event here. And it was just a few days ago that I witnessed another Ferguson protest via Periscope as it was happening. It won’t be long before your students begin live-casting your classroom events. They might even begin live-casting your eLearning while they are taking the course. How are we, as a community of professionals, going to respond? My hope is that one day we will become confident technology leaders responding proactively to new technologies, and leaving our legacy of being fearful reactionaries behind.

In the short time these apps have been around we’ve already seen some impressive use cases emerge.

Let me just pause for a moment and ask the learning community to please leave the live-casting nomenclature alone. As this trend begins to grow you will no doubt find it useful as an education tool, and feel an overwhelming urge to rename it LEARN-Casting. Please do not. I’m begging you right now to resist.

Live-Casting for Training or Performance Support?

My very informal survey of colleagues has shown a pattern of usage similar to the early days of Twitter. Many curiously looked but seeing only millennials rambling on about nothing turned off the desire to investigate any deeper. This is similar to the “I don’t care what you had for breakfast” complaint heard by many during twitter’s earliest days circa 2006. I’m sure most of you remember going through the process.

It’s easy to see how much more compelling live video can be when compared to 140 text characters. And with live video having already been around online in other forms, it’s easier for non-techie types to “get it”.

The use case for training is too soon. However, I don’t think it takes a lot of creativity to see the value in live-casting for the purpose of learning. And at some point it will end up as part of everyone’s blended learning strategy. But will it carry primary content as part of your main training event or will it be considered more useful as a performance support tool? Like every other new trend, experiments will need to be tried. It will be interesting to see how it all plays out.

For users of the Litmos LMS you don’t need to worry about integration. Anything you can link to on the internet can be used as part of your course already. And with the recent announcement of Meerkat’s open API, we will also be investigating a tighter integration with live-casting tools.

A lot has changed since Meerkat’s launch in April 2015.  And I have no doubts that the live-casting landscape will be very different before the end of the year. So hold on and enjoy the ride.

The Learning & Development world didn’t do a lot of things last year. The COVID-19 pandemic kept us from going...