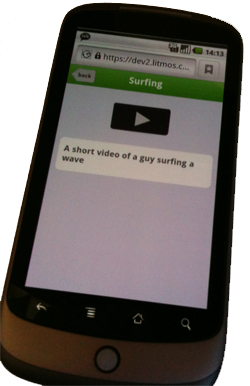 We’ve been down that track before and know that all this over-planning leads to is project scope creep, missed deadlines and extended budgets. Worst case scenario is that when your Taj Mahal of mobile learning projects actually goes live you get poor user adoption! #FAIL

If you’re developing for mobile learning its fair to say you’re living on the edge. Its the wild west out there with new vendors, platforms and most importantly mobile devices popping up almost daily. The last place you want to be is 6 months into a large scale mobile project when something revolutionary like the iPad rolls out and starts to change the game.

The key to keeping up with mobile technology and running well adopted, successful mobile campaigns it to keep it simple. Its easier said than done but to get started you really need to filter down to the single most important feature or concept that you need to make your project a success. A great way to do this is to list all of the ideas you have for your mobile project and then ask the question “If we could only do one of these things what would one would it be?”

This guy opened up shop in the back storage entrance to a hardware store. Foot traffic is great around that area but he didn’t have any signage or seating and it really did look like a dirty old doorway. The one thing he did have is a coffee machine and the skills to make a kick ass coffee which drew in the crowds and earned him a reputation. Project success! After many iterations over the past 6 months this guy now has seating, signage, shelter and it actually looks like a coffee shop.

In the software world we call this Agile development and you will often hear the term “release often, release early”. What this means is that rather than plan and release a huge project in one hit, you focus on updating your project in many small iterations. To get started you focus on the smallest piece of core functionality that you need to get moving, build it and release it. Even if its not 100% how you envisaged, you have something out there that people can use and provide feedback on. The key benefit to this methodology is that you can make changes to the direction of your project in a snap, whether it be related to newly available technology or just from user feedback. It doesn’t matter because your project is agile.

Get started now, release updates to your program often and early. Let your learners guide the content and usability that is best suited to mobile learning in your context and you’re sure to achieve a successful result.

Have you implemented a mobile project recently? Was it a success or did it fail? I’d love to hear about your experiences.

This author hasn't written their bio yet.
Rich Chetwynd has contributed 26 entries to our website, so far.View entries by Rich Chetwynd